What to Do When You See Flashing Lights on the Road

Andrew McDonald has been a tow truck operator for more than seven years. Though he enjoys helping drivers in need, he’s become concerned about his safety. “Over the last few years, it seems more and more people are starting not to care,” he says. “Drivers are more worried about getting where they’re going than what’s going on around them.”

Why roads can be dangerous for tow truck drivers

McDonald would know. Four years ago, the resident of Peterborough, Ont., faced an encounter he’d much sooner forget. While helping a CAA Member with a flat tire, he got clipped on the shoulder by the mirror of a truck travelling on Highway 400. The truck driver didn’t even notice, but the impact propelled McDonald into the air, injuring him.

McDonald has had close calls before, and it’s an increasingly common narrative for those who call the road their workplace. It’s estimated that 100 tow truck drivers are killed across North America each year. The offenders? Drivers who don’t adhere to the law that requires them to slow down and move over.

Whether it’s due to speed, distraction or willful blindness, drivers’ hazardous conduct is giving many serious pause. “We feel unsafe all the time,” says Greg McCracken, a tow truck owner and operator for 20 years. “You have to keep your head on a swivel.” 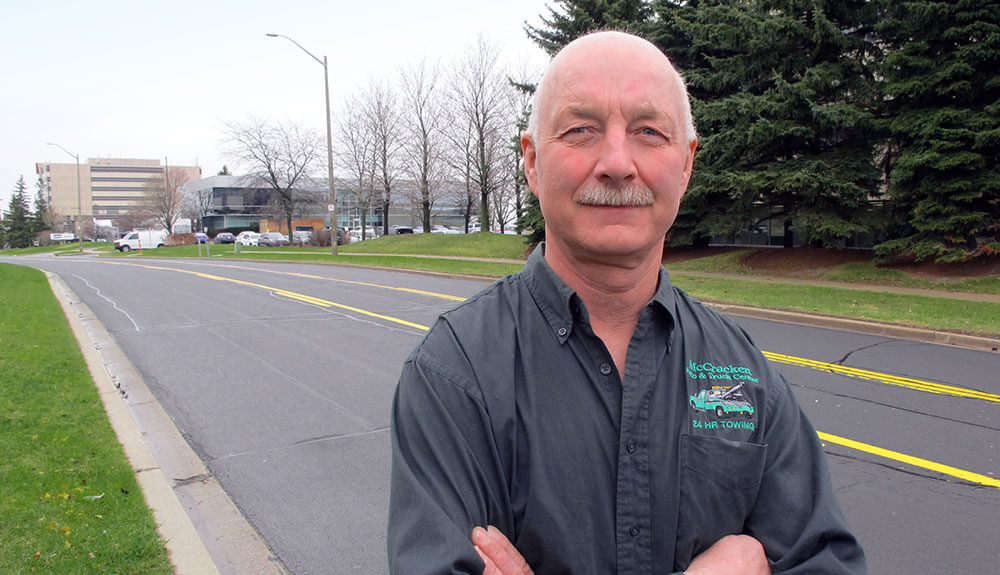 McCracken (above) attributes the increasingly dangerous conditions to cellphone use. “You see guys going over white lines, hitting the rumble strip,” he explains. “It’s pretty scary when you’re out on a highway, and they’re zipping by.” He had his own scare recently when a car took down all the pylons he laid out while working beneath a truck on Highway 401.

Ontario law says to Slow Down, Move Over

That’s why CAA has been a leading advocate for enacting Slow Down, Move Over laws in Canada and including tow trucks.

CAA’s efforts paid off in 2015 through the Making Ontario’s Roads Safer Act. According to the law, when an ambulance, police or fire vehicle, or a tow truck is stopped on the side of the road with its emergency lights flashing (this means amber lights for tow trucks), drivers in the lane next to it must slow down and, where possible and safe to do so, change lanes. Penalties for not following the law include a minimum $490 fine and three demerit points upon conviction.

“The Slow Down, Move Over law not only protects the lives of emergency personnel working on the side of the road, it improves road safety for everyone,” says Teresa Di Felice, assistant vice-president of government and community relations at CAA South Central Ontario.

CAA Clubs are working together to keep roads safe

On May 14, all CAA Clubs across Canada are coordinating a National Slow Down, Move Over Day. It’s part of a broader campaign to remind motorists to be mindful and cautious around truck operators.

After all, everyone deserves a safe place to work—and to make it home to their family. “I had a lot of friends checking in on me and my daughter [after my incident],” McDonald says. “If we can educate the public, that can definitely help. The more we can do, the better.”

Want to help keep everyone safe on the road?

Read more about why Slow Down, Move Over laws are so important. Plus, find out what you need to know about cyclists’ hand signals and how new Ontario cannabis laws affect drivers.