Why Roads Are Becoming More Accessible for Cyclists and Pedestrians

University Avenue, Bloor Street East, Danforth Avenue—they are some of the busiest thoroughfares in Toronto and for years, they were largely reserved for cars.

But in recent weeks, city workers have built dedicated bike lanes on all of those streets. The construction boom is part of a push to make it easier for Torontonians to commute and get exercise while reducing their chances of getting COVID-19.

“We have gotten lots of requests from people to expand walking and cycling space for physical distancing,” says Barbara Gray, Toronto’s general manager of transportation services.

This year, Toronto plans to build 40 kilometres of new bike lanes, 25 kilometres more than it had expected to create before the pandemic. The city has also carved out 60 kilometres of what it calls “quiet streets”—local roads where signs and traffic cones have been placed to slow vehicle traffic, making them more cyclist- and pedestrian-friendly. And in perhaps its biggest move, the city closed sections of two major streets, Bayview Avenue and Lake Shore Boulevard, to car traffic each weekend. On the first day of the closures, May 23, the city recorded 21,000 cyclists and 4,400 pedestrians on Lake Shore, leaving officials "blown away", according to Gray. 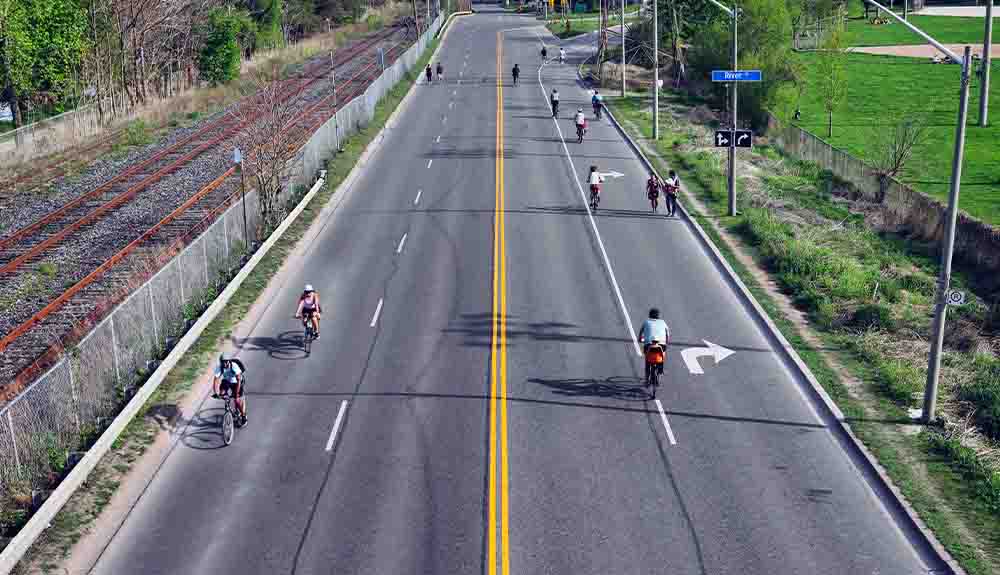 The road closures are part of ActiveTO, a joint effort by Toronto's transportation and public health departments. Toronto is one of several Ontario cities that are making major changes to their roads amid the COVID-19 pandemic. Kitchener's mayor, Berry Vrbanovic, has floated the idea of closing several downtown streets. Meanwhile, both Brampton and Mississauga have installed temporary bike lanes along major avenues.

The COVID-19 pandemic is causing a shift in the way Ontarians get around, says Teresa Di Felice, the assistant vice president of government and community relations with CAA South Central Ontario. In a bid to avoid crowded public transit, more people are walking and cycling. While she acknowledges that the pandemic has been challenging, Di Felice says the surge in what's known as active transportation has at least given many Ontarians a chance to “rediscover their communities and see their neighbourhoods.”

CAA has long been a supporter of cycling and walking, which is often healthier than driving, better for the environment and, particularly for children, helps stimulate creativity, Di Felice adds. Recently, CAA partnered with Bike Share Toronto to provide CAA Members and CAA On the Move Members with special offers and rides on the system, which gives riders access to 6,850 bikes at 625 stations across the city.

CAA has also spearheaded several campaigns to encourage safe cycling and walking, calling on drivers to “Watch for Bikes”, encouraging people to follow the rules of the road in school zones, and promoting the Dutch Reach, a technique designed to reduce the number of cyclists who are hit by the doors of parked cars.

Tips for Sharing the Road

While everyone benefits from drivers being more aware of other more vulnerable road users, cyclists and pedestrians can also do their part to stay safe. If you're one of the many Ontarians who’ve taken up cycling and walking in recent months, keep these tips in mind:

CAA Members can get roadside assistance even while riding their bicycles. Learn how CAA Bike Assist can help if you have trouble on your ride.