They've popped up everywhere from Helsinki to Telaviv to Omaha.

Now, electric scooters, which are battery powered with a step-through frame and a platform for the feet, could soon be coming en masse to the Greater Toronto Area.

Effective January 1, 2020, a new pilot project that allows municipalities to permit the use of e-scooters is in place. Here's what you need to know.

The city of Mississauga passed a bylaw legalizing them in mid-February 2021 as part of an effort to diversify options for short trips in its rapidly urbanizing core.

"We see e-scooters as part of a suite of alternatives for people to move around," says Matthew Sweet, the city’s manager of active transportation.

The effort is part of an Ontario-wide e-scooter pilot program that started in January 2020, which is being spearheaded by Ontario’s Ministry of Transportation (MTO). Municipalities that choose to permit e-scooters are responsible for how they will be managed, where they can be used and parking requirements. Continuing over the next four years, municipal officials will decide if e-scooters should be a permanent fixture on Ontario’s roads.

E-scooters have been hailed as a quick, eco-friendly way to navigate city centres and a potential first and last-mile solution. But they are not without controversy. Denmark’s capital, Copenhagen, has reportedly moved to ban them from its core because officials said shared e-scooters were being left strewn on sidewalks, creating a tripping hazard.

MTO has created a guideline to help municipalities safely integrate e-scooters into their communities and to educate the public on their safe operation. 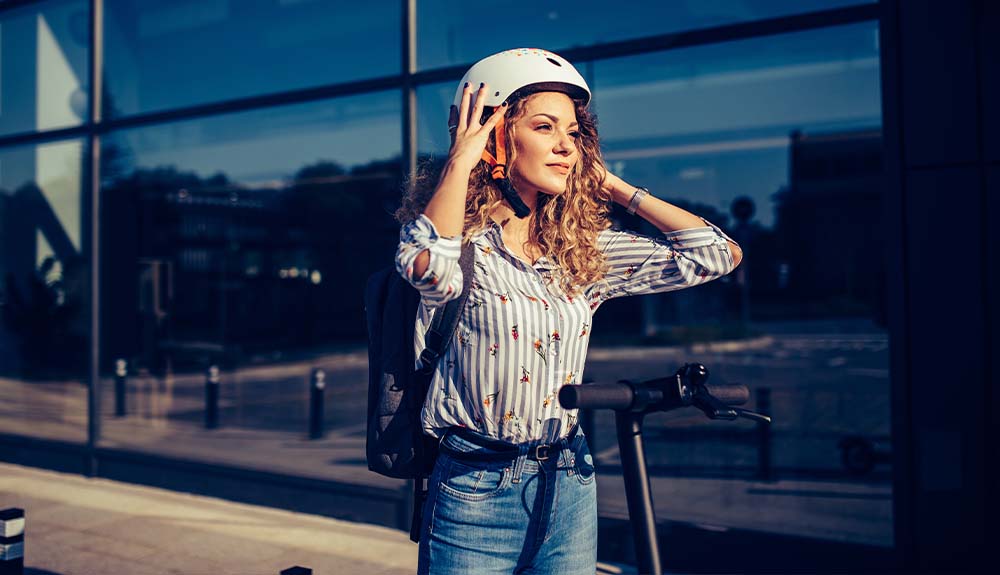 Electric scooters can also be perilous for riders. The Journal of the American Medical Association found that nearly 30,000 Americans ended up in emergency rooms as a result of e-scooter crashes in 2019, a six-fold increase from 2014. The jump coincides with the rise in popularity of shared e-scooter services.

“Generally speaking, what we’re seeing is that there can be safety concerns,” Sweet says.

A recent CAA survey found that some Members are apprehensive about e-scooters. More than 80 percent worry about them being ridden on sidewalks, while 58 percent are concerned about speeding and 57 percent about the vehicles “littering” sidewalks.

MTO has placed strict rules on e-scooters in an effort to ease concerns and to minimize incidents. Included among the several regulations governing their use:

Along with those rules, municipalities may also have specific bylaws outlining where e-scooters are allowed to operate. Some, like Mississauga, have banned them from sidewalks, park trails and transit terminals while limiting their use to roadways with a speed limit of 50 km/h or less as well as any paths that are designated for bicycle use.

For now, the bylaws only apply to privately owned e-scooters. Long term, Mississauga is eyeing the possibility of shared services, which would operate much like communal bike programs. Check your municipality to see if e-scooters have been permitted and where they can be used safely.