Impaired Driving Should Play No Part in the Holiday Season

The reason? Many are concerned that the return of Christmas parties and other get-togethers could lead to a spike in alcohol- or cannabis-related collisions.

“Last year, the pandemic limited how many family members or friends you could see,” says Michael Stewart, a community relations consultant with CAA South Central Ontario. “This year, the same restrictions aren’t in place. So, if you are planning to consume alcohol or cannabis as part of your celebrations, we want to remind people to make a plan and have a safe ride home mapped out.”

Talking to teens about impaired driving 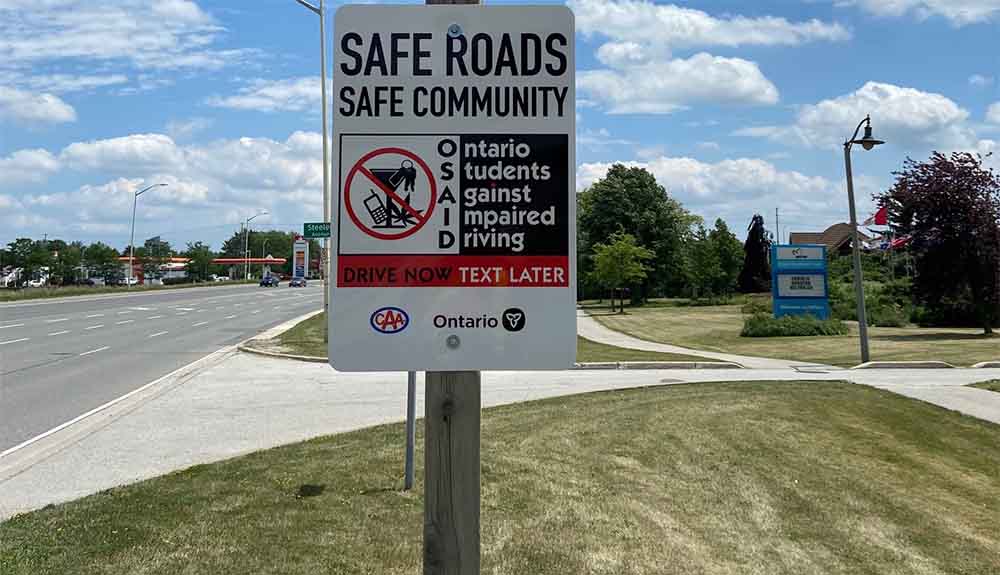 CAA South Central Ontario has joined forces with Ontario Students Against Impaired Driving (OSAID), which has chapters in about 100 high schools, to take that message to teens. CAA recently sponsored an OSAID campaign that placed road signs in 100 communities urging motorists to drive sober. As part of a partnership that dates back nearly a decade, CAA has also supported efforts by OSAID’s student volunteers to educate their classmates about the dangers of getting behind the wheel while drunk or high.

Working with CAA to advocate for road safety

Matt Evans, OSAID’s projects coordinator, says that the organization has ambitious plans for the coming months. It has put together a youth advisory team that aims to add 25 new chapters with support from CAA and Transport Canada. In partnership with CAA and the provincial transport ministry, OSAID is also planning a series of virtual workshops on impaired driving. Plans are also in the works for the first Students Against Impaired Driving Day, which is set for May 19, 2022.

Experts say awareness-raising initiatives like these are critical given that many teens don’t appreciate how hazardous it is to drive while high. A recent CAA survey from earlier this year found that about 20 percent of those ages 19 to 34 incorrectly think that a cannabis-impaired driver is able to operate a vehicle the same or better than a sober driver. And only 63 percent strongly agree that cannabis-impaired driving is a serious safety risk, the lowest of any age group.

Make a plan if you’ll be consuming alcohol or cannabis

As they do every year, police will be increasing the frequency of checks for impaired drivers this holiday season. Stewart urges anyone planning to consume drugs or alcohol to make arrangements for a way home without getting behind the wheel. That could mean staying over at a friend’s house, catching a ride with a designated driver, taking public transit, calling a cab or using a rideshare service.

“CAA wants the festive season to be a safe and enjoyable one for all,” says Stewart.

The effects of cannabis can vary from person to person, and can depend on how it’s consumed. To learn more about cannabis-impaired driving, visit caasco.com/cannabis to continue reading.