Noelville, Ont., is in the pretty French River area, a great spot for tranquil activities like cottaging, camping, hiking and canoeing. And today, off-roading in big, bold trucks.

A row of Toyota TRD Pro Tacomas, Tundras and 4Runners are parked in a muddy field in Noelville, waiting to be put through their paces. Toyota Racing Development (TRD) is the performance arm of the company, and vehicles with this badge always have a few more bells and whistles—and a little extra power.

We’ll be driving all three vehicles on a course designed with a little of everything: steep inclines, plunging descents, a bunch of logs to drive over and plenty of mud.

Off-road basics in the family-friendly 4Runner 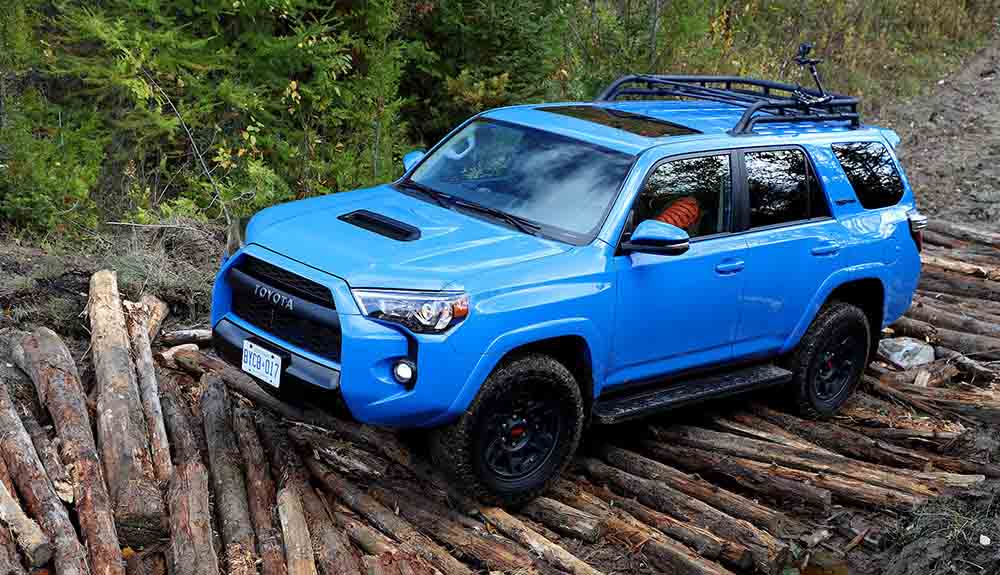 Sporting a more rugged aesthetic than many of the newer SUVs on the market, the 4Runner also has a 270-horsepower V6 engine that sounds louder, thanks to the TRD exhaust. After shifting the AWD vehicle from 4H to 4L in preparation for tougher terrain, I set off on a gravel road that soon veers onto a dirt path and then up the first hill. The incline is so steep that I can’t see what’s at the top. Pressing down on the accelerator, I make my way up, ease off the gas and take the sharp turn at the top that leads to the rest of the course.

Verdict: The 4Runner handled the conditions well, though the ride was bumpier than expected.

Slowing to a crawl in the all-purpose Tacoma

Setting off in the popular mid-size Tacoma pickup, the drive is noticeably smoother going over rocks and deep ruts than in the 4Runner. Approaching 20 or so logs laid out across my path, I turn on the Crawl Control setting and take my foot off the gas. Crawl Control lets the vehicle modulate speed on its own, enabling greater traction over uneven terrain like the logs. I also use it for better control while navigating down a particularly steep hill. It’s reminiscent of being on tracks in a drive-through car wash.

Verdict: The Tacoma was surprisingly comfortable and easy to maneuver.

Slinging mud in the ranch-ready Tundra

The full-size Tundra is built for big jobs, with 381 horsepower, 401 lb-ft of torque and a towing capacity of up to 10,000 pounds. Big is the operative word here, and stepping up into the roomy four-door cab requires an extra stretch of the legs. Since it’s a heavier vehicle, it needs a little extra gas throughout the course. When I get to a muddy stretch with deep sticky grooves and puddles, I worry I’ll get stuck, but as I was told, when in doubt, hit the gas and steer carefully.

Verdict: The Tundra is up to the task, but would be better used towing a trailer.

Read about Toyota’s sporty evolution in the spring 2019 issue of CAA Magazine.