Houston Hotlist: 6 Things Not to Be Missed

Think Houston, and Hurricane Harvey, “we have a problem” and the Astros (who just won the World Series) might be your first associations. But that’s just scratching the surface of this powerhouse city that’s the fourth largest in the U.S., not to mention the most diverse.

To jump in and make like a real Houstonian, here are six things you should definitely have on your itinerary.

Houston’s eclectic character is derived from its unique communities. Start at the Heights: first to pose in front of the “Greetings From Houston” mural, then to take in the pretty pastel-coloured Victorian homes. Stroll along 19th Street, an old-school main street, and pick out souvenirs at kitschy stores or kick back at Eight Row Flint, the local icehouse (a bar hangout in every neighbourhood), with Mexican-inspired snacks.

For a night out, fun-loving Montrose is where you want to be. Sip a perfectly crafted cocktail at Anvil before letting your hair down at Numbers, which is known for its retro music on Friday nights.

Thanks to the Houston Urban Experience (HUE) Mural Festival, more than 20,000 square feet of concrete wall space east of downtown has been take over by colourful art pieces. Founded by local graffiti artist Gonzo247, the festival runs from November 18 to 25, 2017, and includes work from local and international talent. Walk around on your own or get a guided tour to learn about the inspiration behind the murals—that get added ever year during the festival.

This is the spot to get the best photographs, and it remains popular year-round with Houstonians, so be prepared to share the space with families taking quinceañera photos or a music video being filmed.

Savour a meal at a celebrity chef’s restaurant

There are more than 10,000 restaurants in Houston, and that guarantees one thing: you won’t go hungry. Belly up to Hugo Ortega’s restaurant, Xochi, with an empty stomach. The James Beard Award–winning chef’s menu is a nod to Oaxaca, Mexico, and stars delights like house-made queso garnished with crisp insects, pizza-like tlayudas topped with skirt steak and black beans, and succulent pork shoulder braised with Istmeño peppers and roasted pineapple.

Finish with a cup of hot chocolate—frothed up dramatically tableside—served with warm churros for dunking.

Get an out-of-this-world experience in Space City

Hearing squeals of excitement is a given at Space Center Houston, where you can have lunch with an astronaut, touch a moon rock and get a sneak peek at what the mission to Mars will entail, including a simulated Orion capsule. Until March 18, 2018, the Destination Moon: The Apollo 11 Mission exhibit lets visitors get up close to artifacts like Buzz Aldrin’s gloves (which have a nifty checklist printed right on them) and the historic Columbia command module. 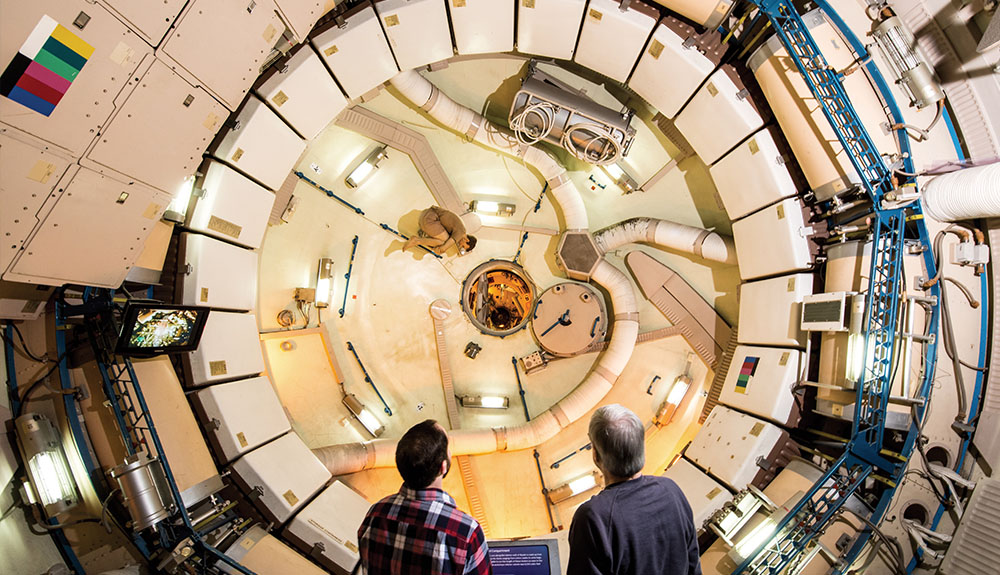 Then hop over to NASA to see the astronaut training base camp. Keep an eye out for a larger-than-life image of beloved Canadian astronaut Chris Hadfield.

Join locals for a delicious charitable cause

Houstonians are passionate about helping each other, and the annual Southern Smoke festival is a good place to experience that philanthropic spirit. This party with a cause blends barbecue, booze and music: all the ingredients for a great afternoon outdoors. Between bites of smoked brisket and tender ribs, mingle with the participating chefs and locals; if you’re lucky, you might even squeeze some barbecuing tips out of them.

The expansive yet walkable Houston Museum District has 19 venues to feed curious minds, from a gallery of contemporary art to a hub of African-American culture. With a paleontology hall, planetarium and virtual reality area, the Houston Museum of Natural Science has plenty to keep the whole family occupied. Make a beeline for the Rainforest Conservatory where pretty butterflies flutter freely, stopping to take a fruit-juice break or bravely settle on visiting guests. Don’t miss a walk through the fiber-optic-lit gem and mineral hall, which is like being in a life-size jewelry box—complete with 2,000-plus-carat topaz crystal.

Heading south of the border?

Get expert advice on how to keep your trip to the U.S. affordable with tips from a CAA Travel Consultant, plus learn how to avoid paying crazy data charges while travelling.

Also, ensure your peace of mind when away from home with CAA Travel Insurance.