Rugged Luxury: Why You’ll Love the Rockies by Rail

An unforgettable trip aboard the Rocky Mountaineer from Vancouver to Jasper, and then on to Banff by way of the Icefields Parkway

After a five-hour flight and three time zones—I may as well have flown over an ocean—I’m walking through the thick, mossy trees of Stanley Park and wandering the cobblestone in Gastown. And when I’ve finally oriented myself in Vancouver, I’m whisked away on a train that winds its way into the mountains. It’s all very poetic, and I—the professional passenger, a certified window daydreamer—am thrilled.

We’ll be on the Rocky Mountaineer train for two days, spending the night in Kamloops in between. Then, after a couple of nights in Jasper, we’ll board a bus that will take us along the Icefields Parkway, where we’ll end our journey in beautiful Banff.

“You can’t be in Western Canada and not have a salmon dish,” he says. I comply, happily.

The glass dome in the luxurious GoldLeaf section alone sets it apart from any commuter train—that and the dining room below, with picture windows showing off the scenery as we pass. After a brunch of smoked meat Benedict, it seems like no time has passed before it’s time for wine and cheese. And there’s still lunch.

Reason 2: The cuisine served throughout the day

“Our chefs are very creative,” says executive chef Jean Pierre Guerin as he walks us through the narrow galleys where the food is prepared. Everything is tailored to fit this unique kitchen and all equipment is on lockdown for safety; the gentle bumps and sway add another element to an already challenging job.

There are 28 chefs on this train, Guerin tells us, and each GoldLeaf car has its own kitchen. Bread is in the oven, tenderloin prepped to be seared to order, salmon fillets with salmon mousse ready to be baked. “You can’t be in Western Canada and not have a salmon dish,” he says. I comply, happily.

Reason 3: The indescribable views outside the window

As impressive as this train—and the operations that go on behind the scenes—is, it’s nothing compared to what’s happening outside our windows—sorry, skylight.

We joke about how we’re running out of adjectives. Breathtaking. Stunning. Majestic. None of them do justice to the scenery. This is nature in all of its glory, in all its dimensions. We’re going through tunnels blasted into rock, following the steady flow of the Fraser River, passing thick walls of birch. We see Mount Robson—the tallest in the Canadian Rockies, so high it has its own weather system—peeking from the trees. 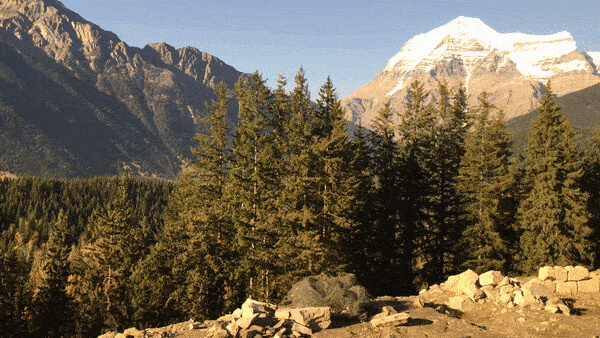 We pass over the Rocky Mountain Trench, a 1,600-kilometre fault line that can be seen from space. And when the golden light hits the rolling, tree-covered landscape, well, I won’t even try to find the words.

A walk around Lac Beauvert that should take me about an hour takes me two, because I stop every 10 minutes to take a picture.

Sometimes we have to stop to allow for rail traffic. At lunch on the second day, waiting for clearance to continue, a CN freight train passes us on the other side of the river: kilometres long, with hundreds of cars, carrying who knows what from who-knows-where Canada.

Reason 4: The upscale accommodations against a dramatic backdrop

When we do arrive in Jasper, our last stop on the train, we’re driven to the Fairmont grounds, which are the epitome of high-end rustic living. At the Stanley Thompson Lodge, with its deep tubs, open kitchen, antler chandelier and fire pit, we’re giddy, like teens on a school trip that got the best cabin.

A walk around Lac Beauvert that should take me about an hour takes me two, because I stop every 10 minutes to take a picture. I’m laughing and shaking my head because it’s all so beautiful it almost doesn’t seem real. Deer graze in plain sight along the path; Canada geese are everywhere. There’s a eucalyptus steam room and a heated pool on the grounds, but there’s not enough time—there are trails to be explored, hikes to take along the Athabasca River and boat trips to enjoy on the mountain-lined Maligne Lake.

I’d love to drop everything and stay here forever. I start to wonder if they’ll hire me at the Fairmont, which employs more than 500 people—90 per cent of whom live on the grounds, almost 75 per cent of them are Canadians from all over—but once again I’m swept further along. This time onto a bus driving the Icefields Parkway, which travels through Jasper National Park into Banff National Park.

Reason 5: The unreal stops along the Icefields Parkway

There are mountain peaks everywhere (once the morning rain and fog clear) and we pass waterfalls, glaciers nestled in valleys and lakes a light jewel blue, coloured by rock flour, a fine dust that slowly collects as the glaciers move.

“It’s like a giant frozen river,” says Marianne Landry, a petite brunette from Montreal. She’s driving us in a million-dollar vehicle with six five-foot-tall tires on the Athabasca Glacier. Every day the glacier moves several centimetres. Landry is upbeat and funny: “I bet this is the first time a little French girl has driven you in a big bus.” She’s been here for three years, guiding and climbing. “These mountains are very special.”

In fact, every guide, every driver, every hotel clerk that I talk to on this trip seems to be from a different corner of Canada. They’re all young, all drawn to the beauty, the wildlife and the adventure. And they all talk about how hard it is to leave.

The Rockies are magnetic, and they’re dramatic. There’s so much power in the ancient stillness of the mountains; the infinite flow of the rivers; the slow, steady grind of the glaciers.

It pulls you in. It stays with you. And you can get lost—or maybe found—in the reverie. Even from the window seat. 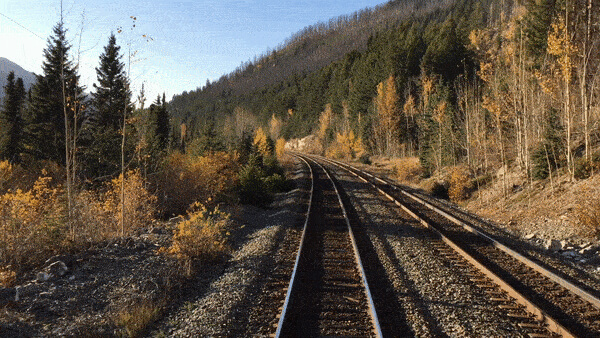 Take the Journey through the Clouds from Vancouver on to Kamloops then Jasper. Or get on board the First Passage to the West from Vancouver to Lake Louise or Banff; the Coastal Passage leaving from Seattle; or the three-day Rainforest to Gold Rush that also ends in Jasper, via Whistler. Along with these four extraordinary routes, Rocky Mountaineer offers a wide variety of packages, with add-ons that include the drive down the Icefields Parkway, an Alaskan cruise or even helicopter rides.