Ready to Rumble: Inside Canadian Rally

Success in rally driving and navigating requires skill, precision and teamwork. But its most important ingredient is a love of loud, dirty fun. 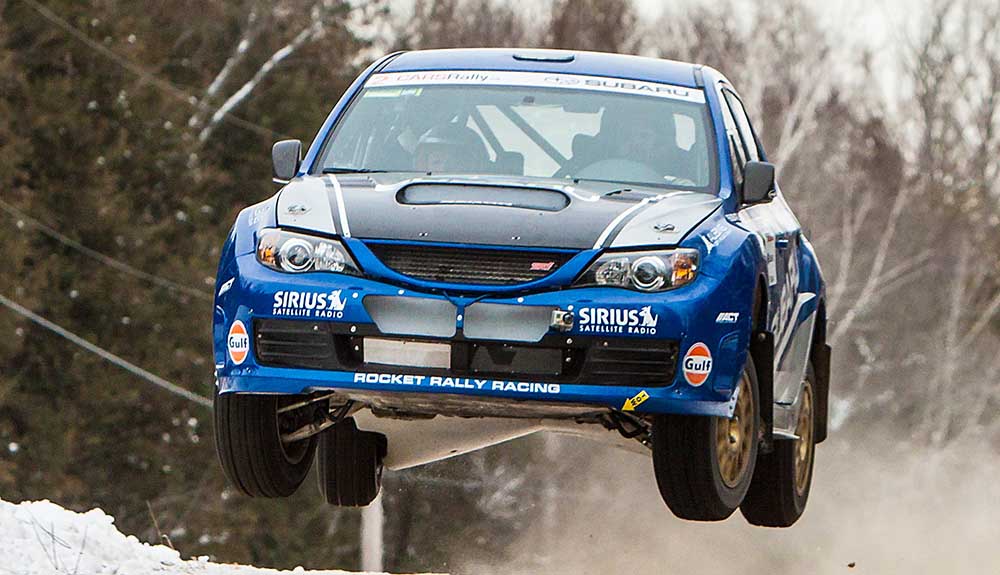 The pages in front of me bounce wildly as I try to read the pace notes to my driver.

“Right four opens over crest into left six 100 over jump.” I’m yelling to make myself heard. The turbocharged all-wheel-drive Mitsubishi EVO VI is roaring, at full throttle, over an icy gravel road. My helmet radio crackles as the mic smacks me in the mouth with every bounce.

Outside is a blur of black and white, shadows and glare from the bright headlights slashing the inky November night. But I’m not looking out. There’s no time. Instead, I feel each crest, corner and straightaway and correlate them to the notes I’m reading.

We’re on a shakedown run (a test trial) at the Rally of the Tall Pines, near Bancroft, Ont., and I’m getting a taste of what rally co-driving is all about.

For me, like my dad before me—a successful winter rally campaigner back in the 1960s—rally offers the thrill of driving fast on challenging roads. But there is much more to it than sliding and jumping a fast car in the backwoods.

Bruce Leonard, president of RallySport Ontario and a co-driver since 2007, says the appeal is working as part of a team and the challenge of getting the details right.

“It’s an interesting collaboration between two different skill sets,” he says. Drivers must have excellent car control skills and nerves of steel, and co-drivers have to be extremely precise, steady and, in time-speed-distance rally, good at math. And the two must have perfect trust in one another, or they won’t succeed.

A self-professed detail person, Leonard says he’s good at puzzles and loves maps, which makes him an ideal co-driver, especially in the navigational rallies. He also has another important quality: he doesn’t get motion sickness while reading in a moving car. In fact, Leonard got his start in the sport when a friend’s co-driver kept becoming ill and he stepped in.

James Drake is another long-time rally participant who also volunteers on the executive of the Maple Leaf Rally Club. For him, the appeal is that “it’s you against the road and the conditions. You’re trying to go fast on a road that was not designed for it.”

He also loves that rally is a group effort. Performance rally has the largest teams, with a driver and co-driver usually supplemented by a couple of mechanics.

People in the sport are like family. “Everybody looks out for each other,” he says. “Crews will help another team if there’s a problem. People share parts, lend their crew.”

Time-speed-distance rallies are often a gateway to the sport since they’re more affordable—some entry fees are as low as $20—and you don’t need expensive safety equipment. Anybody can show up and give it a try; all you need is a road-worthy vehicle, a driver, navigator, calculator, digital timepiece, notepad and pencils.

“It’s the best way to learn to work with a partner,” adds Leonard, and he should know—he navigates while his wife, Jane, drives. “What is said in the car stays in the car,” he chuckles.

Back at Tall Pines, it’s the morning after my shakedown run in the right seat. The sun is barely up, it’s -25°C, and I’ve joined hundreds of excited fans as they mill about, clutching hot coffees and checking out the cars before the official start.

I follow the crowds, and we trek through the woods to line the roads at high-speed turns and the rises where the cars get air. We cheer on every car with gusto. By the time we’ve walked a couple kilometres together, we’re all friends, joined in our common love of the action, noise and the great outdoors.

It’s a special kind of sport that gets people out of bed to stand in the frozen woods watching cars fly over jumps and spray gravel as they slide through corners sideways. Allie Marsh, who recently started working as a rally volunteer, sums it up neatly: “I enjoy it because it’s a motorsport that I can do with a car I have,” she says. “It’s loud, it’s dirty and it gets me outside to play with cars.”