Canadian comfort foods to help you survive the cold.

Baby it’s cold outside but never fear! Canada has many comfort foods to warm the soul and lift your spirits on frigid winter nights. Here are just some of our favourites.

This pita sandwich is filled with spit-roasted beef, tomatoes, onions and dripping with sweet, garlicky “donair sauce”. This comfort food for native Haligonians is usually eaten after a night out, but it can, of course, be enjoyed at any time of day. Get the recipe from allrecipes.com.

While this “bag pudding” that originally hails from Newfoundland and Labrador sounds like it’s a fig pudding, there are actually no figs in it. It seems that “fig” is an old Cornish word for “raisins,” which are used in figgy duffs. The recipe usually calls for a combination of flour, butter, molasses, sugar, milk, raisins and spices, which are then placed in a cheesecloth bag and boiled. Get the recipe from Rock Recipes. 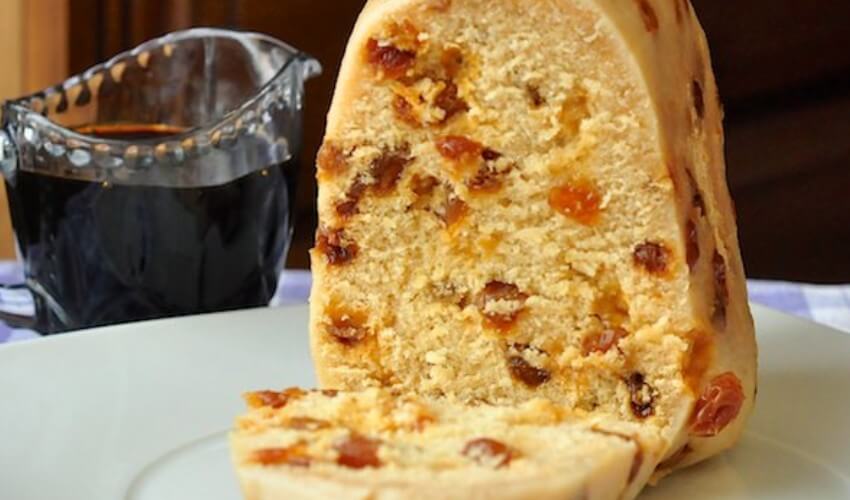 This traditional Quebec dessert (variations of which are also eaten in some places in Europe) evokes memories of trips to the sugar shacks of rural Quebec. It can be made with brown sugar and whipped cream or condensed milk (and eggs) and can also include maple sugar/syrup, which makes it more Canadian. Get the recipe for maple sugar pie from Acadian Foodie.

This tiny pastry tart is kind of like a small sugar pie with raisins, but some would say different. The butter tart is a much-revered Canadian treat, which should be enjoyed at any time of year, but it’s perfect for holiday celebrations and cold days when you need a serious sugar fix. Get the recipe from allrecipes.com.

Tourtière is a Canadian meat pie dish originating in Quebec and usually made with minced pork, veal or beef and spices, like cinnamon and cloves. You can also add wild game if you have some lying around. A holiday staple for French Canadians across Canada, there are regional variations of tourtière specific to Saguenay-Lac-Saint-Jean, Montreal, Acadia and other locations. Get the recipe from allrecipes.com. 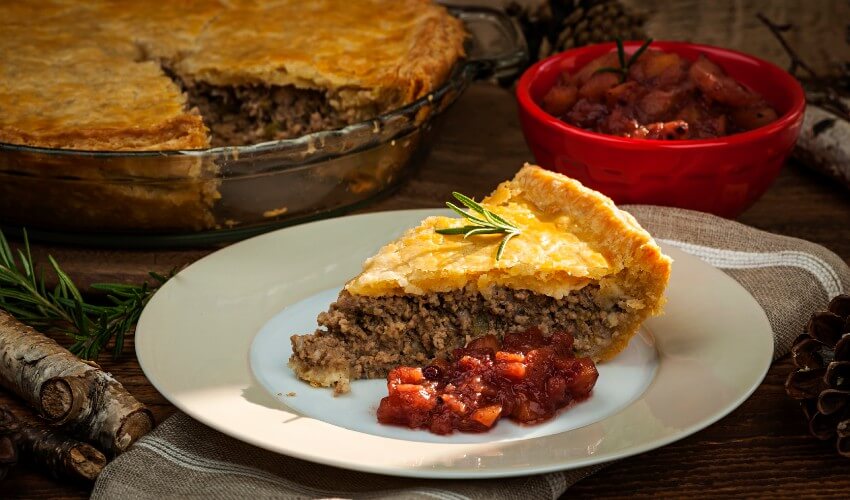 You know that clamato juice is exclusively a Canadian thing, right? It’s hard to imagine but some people think putting clam juice in your tomato juice is weird! The Bloody Caesar was invented in 1969 by restaurateur Walter Chell to celebrate the opening of a new Calgary restaurant. These days you can get them in hip cocktail bars in the U.S. and in cities along the border between our countries ­­– but they still belong to us. Get the recipe from Food Network.

Ottawa chef Marc Miron reportedly did some research and learned that 16th-17th Century explorer Samuel de Champlain and his crews were probably eating split pea soup with cured meat back in the day. This means the classic Canadian dish likely dates back more than 400 years. The perfect history lesson in a bowl for a snowy day. Get the recipe from Pairings.

The wild Saskatoon berry is native to the prairies and described as having a “sweet, nutty almond flavour.” These berries are serious business and have an entire “institute” dedicated to them.  The pie is traditionally enjoyed with a scoop of vanilla ice cream, creating a truly Canadian comfort food experience. Get the recipe from Acadian Foodie. 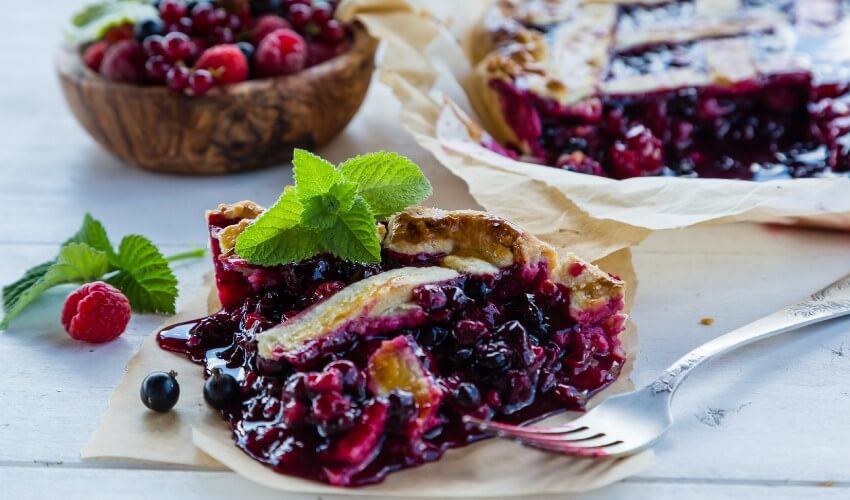 What makes Montreal bagels so special, as far as we understand it, is the honey added to the dough and to the boiling water and the fact that they are always baked in wood-fired ovens. Now that many members of the bagel-making community have moved away from Montreal, you can find Montreal-style bagels in shops in many other cities. Get the recipe from Genius Kitchen. 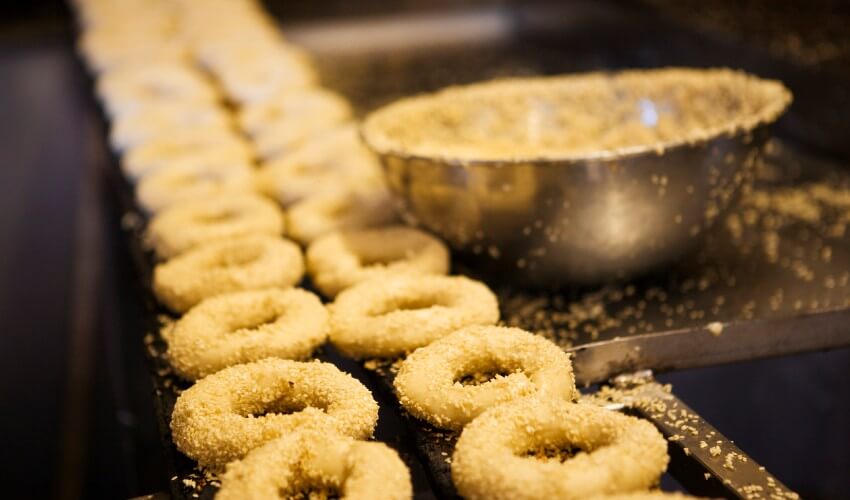 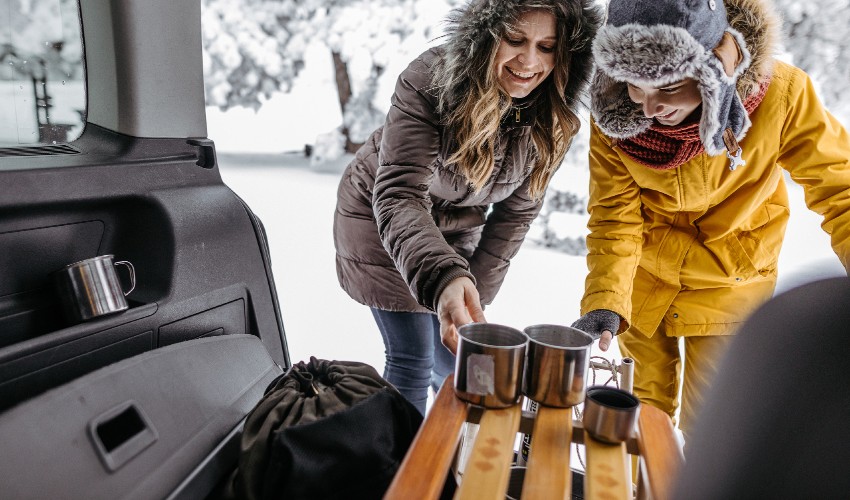 Winter escapes are lots of fun and Ontario is full of resorts and activities to enjoy with family and friends. So what are you waiting for? 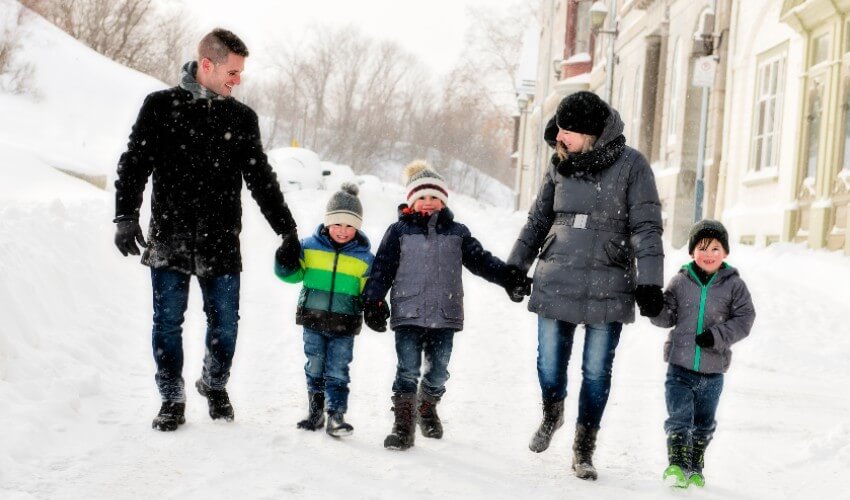