Experience the Ocean like Never Before on Celebrity Edge

A Destination in Itself.

Celebrity Edge was named for its ground-breaking design that gives passengers the experience of being right at the edge of the water throughout their voyage. Conceived using 3D imaging technology, Celebrity Edge features an innovative endoskeleton design that allows for public areas and cabins that are open to the sea in a way that has never been done before in an ocean cruise ship.

Particularly striking are the Celebrity Edge staterooms that feature Infinite VerandasSM. These cabins have balconies that are incorporated into the main room, giving passengers extra air-conditioned space. The wall-to-wall, floor-to-ceiling glass windows offer ocean views unlike those seen on any other ship and create the effect of a private sunroom. Then, with the push of a button, the top window descends to create a more traditional open-air balcony.

Folding doors in the rooms can be completely closed, separating the interior living space from the balcony or left open to create an indoor space that is roughly 23 per cent larger than traditional cabins. The ship boasts 918 of these Infinite VerandaSM cabins.

For even more luxury, Celebrity Edge also offers two-storey Edge Villas, each with their own private plunge pool!

Eden and the Rooftop Garden.

Another striking way that this ship seamlessly blends the indoors with the outdoors is with a three-deck-high, lush garden lounge, dining and entertainment space at the back of the ship called Eden.

Featuring floor-to-ceiling windows, Eden is a terraced lounge that winds up from deck 3 through decks 4 and 5. This multi-purpose dining and entertainment space offers a variety of seating areas facing the water, offering spectacularly wide-open ocean views.

The Rooftop Garden is an area filled with lush greenery and natural tree sculptures which also serve as seating. It’s used for shows and musical performances in the evenings as well as yoga and other activities during the day. The Rooftop Garden also has a grill kitchen, serving up barbecued fare day and night.

If grilled meats and fish aren’t to your taste, fear not. Celebrity Edge features 29 different restaurants and dining areas offering up a vast selection of food options, including regionally inspired wines, cocktails, and specialty dishes.

Edge also allows cruise passengers get closer to the ocean than ever before with the introduction of the Magic Carpet – a 90-tonne open-air platform the size of a tennis court that is perched on the outside of the ship. It moves up and down the hull along a track from deck 16 all the way down to deck 2, just above the water. Its function varies depending on which level it is placed.

At its lowest point, the Magic Carpet serves as an easy way for passengers to board small boats for excursions to shore. This avoids the bottleneck that sometimes happens on other ships.

Other times the platform functions as a cocktail venue and an al fresco seafood restaurant right out over the water. Guests are literally dining on the ‘edge of the sea’! 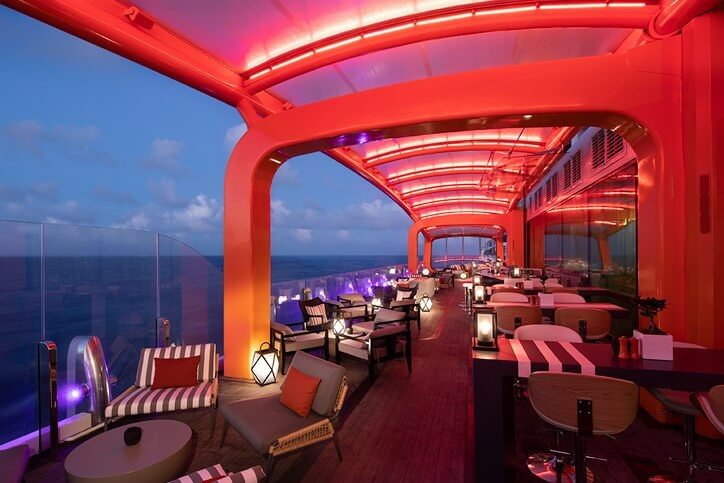 When given a sneak preview back in November, CNN Travel called the Celebrity Edge a ‘futuristic cruise ship.’ This was partly for the innovative design of the ship allowing for those unprecedented ocean views, but it also refers to how technologically advanced The Celebrity Edge is.

The ship uses facial recognition technology for seamless embarking. Passengers can check in online and upload their photo from home and then simply walk up to the express boarding lane on departure day. Your phone not only opens the door to your stateroom, but it also can be used to control the lights, the room temperature, and even the TV and the blinds.

The Celebrity Edge was named “Best New Ship” at the Cruise Critics U.S. Editors’ Picks Awards. She had her maiden voyage in December and will be sailing the Caribbean until the end of February. Then she will be moving to her new home offering a variety of Mediterranean cruises.

Even seasoned cruisers will be stuck by how this ship takes them to the edge of where ship meets ocean like no other vessel. Check out the upcoming sail dates and destinations and choose the perfect cruise for you.