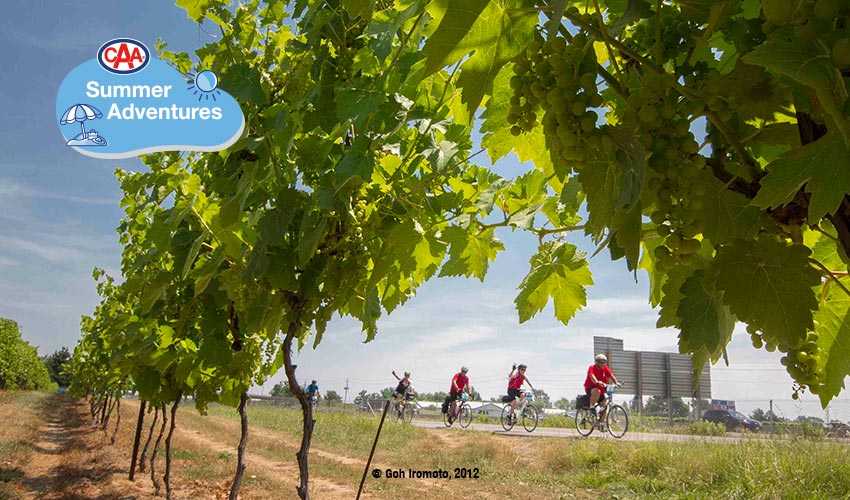 If you’re looking to try your foot – sorry, we couldn’t resist – at long-distance cycling, Ontario’s southern Niagara region is a great place to start. The scenery is pretty, the terrain is flat and, with numerous farmsteads, wineries and small towns en route, there are lots of places to stop and relax. Before you hop on your bike, make sure you brush up on cycling safety and rules of the road.

When many people think of long-distance cycling, they picture sinewy riders powering their way through the French Alps. But following the Niagara Circle Route South is a leisurely affair where you’ll see more impassive dairy cows than yellow jerseys. Dedicated bike paths, virtually no hills and plenty of places to stop for refreshments make the 125-kilometre loop one of the province’s most relaxed two-day rides.

You can start anywhere along the loop, but we recommend Welland, a city of about 50,000 just south of St. Catharines. On Saturdays from 6 a.m. to noon, Welland hosts the largest farmers’ market in the Niagara region, where you can stock up on picnic supplies like apples and fresh grape juice to enjoy along the way.

From there, it’s an easy 45-minute ride to Port Colborne alongside a disused spur of the Welland Canal, the engineering marvel that connects lakes Erie and Ontario, allowing ships to bypass Niagara Falls.

Port Colborne is the southern gateway to the canal; Lock 8 Gateway Park, in the northern part of town, offers spectacular views of the gigantic cargo ships that ply the Great Lakes. Make time for a break along West Street – the city’s main tourist drag – which includes antique shops and eateries. If you’re peckish, pop into the Pie Guys Bakery & Cafe for a butter tart. The actual Pie Guys are Toronto expats Rob Carter and Brennon Zwingli, who are big champions of their adoptive city. “Port Colborne isn’t on the map like Niagara Falls or Niagara-on-the-Lake,” says Carter. “We always hear people say it’s a hidden gem.”

Set out from Port Colborne along the Friendship Trail. This railbed-turned-cycling path runs through 16 kilometres of bucolic countryside to Ridgeway, where you’ll find the Brimstone Brewing Co. Inside a former church, the brewery’s taproom features flights of religiously inspired beers (think Midnight Mass Oatmeal Chicory Stout and Sinister Minister IPA) served on a cross. Keep the sampling to a minimum – drinking and cycling don’t mix – and make a beeline for Old Fort Erie, site of one of the last battles of the War of 1812. Much of this part of Niagara was ground zero in the pre-Confederation conflict between the United States and Great Britain, and the fort – replete with actors in period garb – offers a look at a time before Canada was Canada. The city that surrounds the historic site, Fort Erie, makes for a nice place to bed down for the night.

Kick off your second day with a 27-kilometre ride down the Niagara River to Dufferin Islands, a tranquil series of human-made islands filled with ducks and geese, just a stone’s throw from Niagara Falls. If you’re up for battling the hordes, head north to revel in the majesty – and the cooling spray – of the Horseshoe Falls. Next, pull a U-turn and make your way to the sprawling Mount Carmel Monastery. A masterpiece of Old World architecture, construction of the building began in 1894. It’s also home to the Monastery Cellars, which makes an award winning ice wine you can try on site.

From there, it’s a leisurely 24-kilometre ride back to your starting point in Welland – and hopefully a comfy chair.

Not to be missed: the Great Lakes Waterfront Trail.

In 1995, officials opened a 350-kilometre multi-use trail in Ontario between Hamilton and Trenton. It was one of the opening salvos in a push to revitalize Lake Ontario’s waterfront, huge sections of which had fallen into post-industrial disrepair. That pathway would mark the start of what is known today as the Great Lakes Waterfront Trail, a 3,000-kilometre walking and cycling route that connects three Great Lakes, 140 communities and 42 provincial parks.

“A lot of people forget how beautiful Ontario is,” says Marlaine Koehler, executive director of the Waterfront Regeneration Trust, which manages the trail. “But when you’re on a bike you’re riding through the scenery that makes Ontario such a special place and the Great Lakes an incredible treasure.”

Almost any two-wheeler will do, as long as it’s in sound mechanical shape and has a comfortable seat. Shopwithcaa.com has quality cycling essentials, all at a great price. Just remember, always wear a helmet and make sure you’re wearing your helmet properly.

Did you know CAA offers Bike Assist as part of your Membership? Go to caasco.com/bikeassist for details. Download the CAA App to your smartphone before you go and use it to contact CAA Bike Assist™ if you need roadside help. 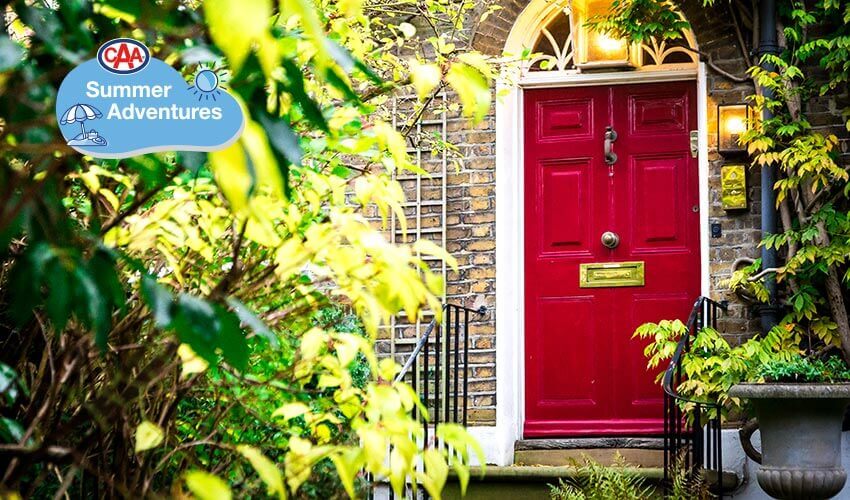 Updating your house exterior can be as easy as painting your front door. It’s even better that CAA Members can save money and earn CAA Dollars® at Dulux Paints.

Whether you’re having your picnic in your backyard, at the local park or on an outdoor adventure, we’ve got easy picnic ideas you’ll love.

Love the complex flavours of smoked food? In just a few simple steps, you can be smoking food on the barbecue you already own.