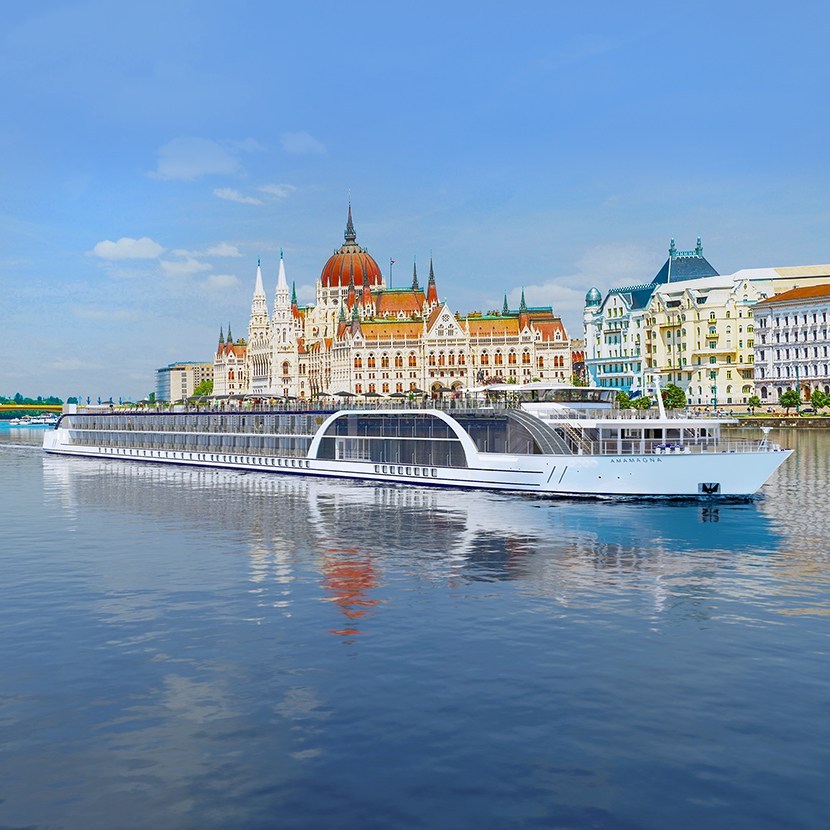 River cruising has become increasingly popular in recent years. Unlike ocean cruises, there are no ‘days at sea’ where the ship is surrounded by endless water. River cruises offer continuous scenery and constant opportunities for adventure.

The Danube is the second longest river in Europe, flowing from the Black Forest in Germany to the Black Sea. It runs through ten countries, more than any other river on the planet, past many of Europe’s most beautiful cities and historic sites.

The newest ship from AmaWaterways, the AmaMagna offers travellers a unique and unforgettable way to experience the fascinating destinations along the mighty Danube. At twice the width of traditional river ships, the AmaMagna offers guests a host of amenities traditionally only found on ocean-going cruise ships.  Travellers enjoy the luxury of more personal space – large suites with full balconies for taking in the glorious countryside, picturesque towns, and historic sites along the river banks.

Here’s just some of what you can see along the way.

Budapest is often referred to as the Queen of the Danube, as the river runs right through the heart of the city. Because this is Hungary’s capital city, the Parliament building, which is the tallest building in Budapest, sits right on the shore of the Danube. This city is renowned for its architecture. While the Parliament Building is a refined example of Neo-Gothic architecture, the city’s Art Nouveau structures offer fantastic photo opportunities.

Visitors can take in spectacular views of the river, visit Roman ruins, and tour the World Heritage sight of Buda Castle, the ancient home of Hungarian kings, with a hike up Castle Hill. If the walk looks too steep for your liking, there is also a funicular to take you up.

Other top draws for this city include relaxing in the thermal baths or enjoying a leisurely afternoon in one of the city’s historic cafes.

The AmaMagna will sail from Budapest to Bratislava, nestled along the Danube River by the borders of Slovakia, Austria, and Hungary. The capital of Slovakia, Bratislava is surrounded by mountains, vineyards, and forested hiking and cycling trails.

The Old Town of Bratislava is the historic medieval centre of the city, known for its numerous churches, pedestrian friendly waterfront, and cafes and restaurants.

No visit would be complete without exploring the historic Bratislava Castle. Perched on a walkable hill overlooking the Old Town and the river below, the castle features a courtyard park, ancient stone towers to climb, as well as a museum, giftshop, and café.

Bratislava and Vienna are the closest national capitals in Europe, just 55 kilometres apart, so naturally, the Austrian city is the next port of call.

Known as the ‘City of Music,’ Vienna has been home to Mozart, Beethoven, Brahms, Schubert and Strauss. The city’s rich history, culture, and combination of Gothic, Baroque and Art Nouveau architecture draw visitors from all over the world.

While in town, be sure to visit the Kunsthistorisches Museum – which houses classic works by Rembrandt, Raphael, and Vermeer alongside Egyptian, Greek, and Roman antiquities.

The 600-year-old imperial palace of Hofburg is also not to be missed. Once the home of the powerful Habsburg monarchy, the palace complex incorporates the baroque library, the imperial chapel (where the Vienna Boys’ Choir sings), and the Spanish Riding School (home to the famed Royal Lipizzaner stallions.)

Don’t leave town without sampling the traditional Viennese pastries and cakes in one of the city’s classic coffeehouses.

The moorings at Linz, the next city down the river, are located just a short walk from the Hauptplatz – the main town square – lined with medieval and renaissance buildings, bars and patios.

From the Hauptplaz, travellers can visit the Lintz Castle – which houses a restaurant and a museum – or hop on the Pöstlingberg mountain tram, for a ride up the steepest adhesion railway in Europe.

Across the river from the town square is the Ars Electronica, the ‘museum of the future.’ This giant crystal structure features exhibits exploring new media and technology, and allows visitors to interact with robots and drones.

The city is also known worldwide for being home to the world’s oldest cake, the Linzer torte, whose recipe dates back to 1653.

The Danube meets up with two other rivers, the Inn and the Ilz, at the beautiful city of Passau. Founded over 2000 years ago, Passau is one of the oldest cities in Bavaria. The historic old town is perched on a peninsula right at the confluence of the three waterways.

To get your best views of the ancient city, visitors can climb a staircase that is built right into the mountain up to the Veste Oberhouse. This is a fortress that was constructed in 1219. Today it houses a cultural history museum and a restaurant, and the site offers spectacular vistas of the rolling hills and rivers below.

Also not to be missed while docked in Passau is the St. Stephens cathedral, a baroque church dating back to 1688. The cathedral boasts the largest Catholic Church organ in the world, a technical wonder featuring 17,774 pipes and 233 registers.

Visitors can enjoy wandering the historic old town of Passau, sampling the local beers and Bavarian cuisine, or exploring the forested cycling trails that crisscross the region.

A journey along the mighty Danube river allows travellers to experience the romance of Old World Europe first hand as they stand on the spots where ancient kings and queens were crowned and timeless music was composed and performed by the likes of Mozart and Beethoven.

From visiting historic castles and towering cathedrals to enjoying sidewalk cafes and bustling markets, all from the comfort and luxury of Europe’s largest river cruise ship, a sail on the AmaMagna will be an experience you’ll never forget. And those are just some of the destinations this ship offers.

AmaWaterways has also created an epic adventure for golfers. The AmaMagna offers a special itinerary featuring stops for rounds of golf at world-class courses in five different countries along the Danube.

December cruises feature stop offs at many of the historic, festive Christmas markets celebrating the holiday season throughout the region.