All You Need to Know About the 2018 Alfa Romeo Stelvio

Alfa Romeo is staging a return with its stunning new SUV

If you’re like me, it’s been a while since you’ve seen an Alfa Romeo on the streets. The storied Italian automaker abandoned North America in the mid-1990s, leaving behind a collection of beautiful, if temperamental, cars.

More than two decades on, Alfa is taking another run at this continent, and at the tip of its spear is the 2018 Stelvio. The sleek mid-size SUV hit dealerships late last year. With a starting price north of $52,000, it is an ambitious play by a carmaker that has been absent from Canada since Jean Chrétien’s first term.

Not only is it Alfa’s first-ever SUV, it’s being pitted against some fierce competition from the German quartet of Audi, BMW, Porsche and Mercedes. (Our option-filled Ti model comes in at a hefty $67,500—more than the sublime Porsche Macan S.)

For the Stelvio to compete in that rarefied territory, it’s going to have to be much better than the last generation of Alfas to arrive on North American shores. Thankfully for Fiat Chrysler—which owns Alfa and is reportedly spending $2.7 billion to relaunch the brand—it is.

The vehicle, named after a famously winding mountain pass in the Italian Alps, gets its power from a snappy four-cylinder, 280-horsepower engine that produces 306 pound-feet of torque and is mated to an eight-speed transmission. The combination gives the Stelvio plenty of get-up. But what really sets the vehicle apart from other mid-size SUVs is its handling. Intelligent all-wheel drive, a fifty-fifty weight distribution and a firm suspension allow the Stelvio to throw its 4,000 pounds in and out of corners with aplomb. On winding country roads north of Toronto, it felt almost car-like—probably the highest compliment you can pay an SUV. 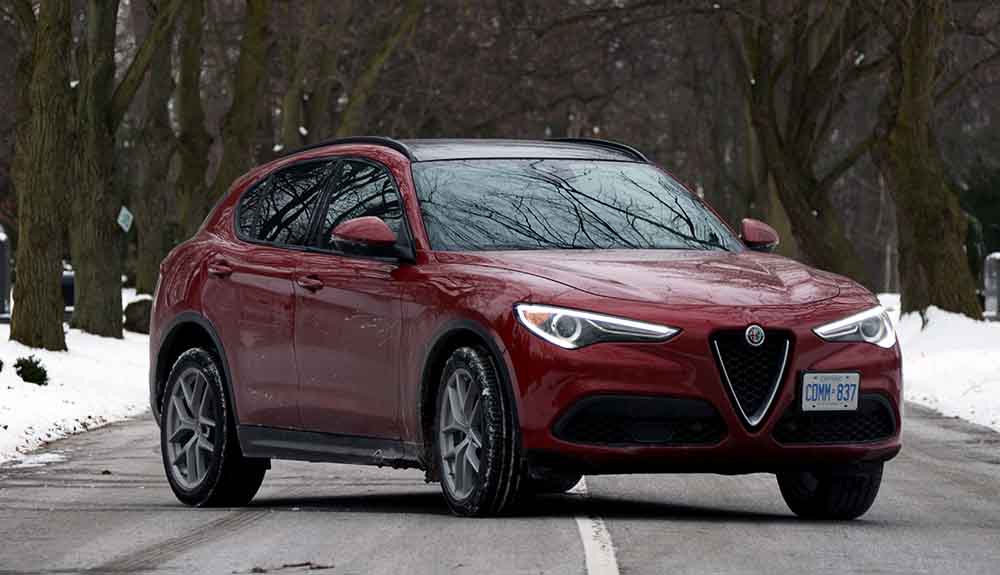 And it should handle well. The Stelvio is based on the same platform as Alfa Romeo’s Giulia sedan, Motor Trend’s 2018 Car of the Year. Like the Giulia, the Stelvio has three driving modes: Dynamic, Natural and Advanced Efficiency. They automatically tweak the suspension, engine and transmission to either favour performance or fuel economy. Our Ti model came with a pair of gloriously large paddle shifters that came alive in Dynamic—read “sport”—mode. We put them through their paces in farm country, and found the gear changes fast and smooth.

Weighing the 2018 Stelvio’s pros and cons

The vehicle’s interior isn’t out of place in the world of premium SUVs. The Ti model we reviewed came with leather seats, brushed aluminum trim and a dual-pane sunroof. It was a nice, refined package with a minimum of plastic. On the outside, the Stelvio’s abundance of curves screams Italy. And while Alfa’s signature triangular grille might not be everyone’s cup of tea, the whole offering is definitely pleasing to the eye. 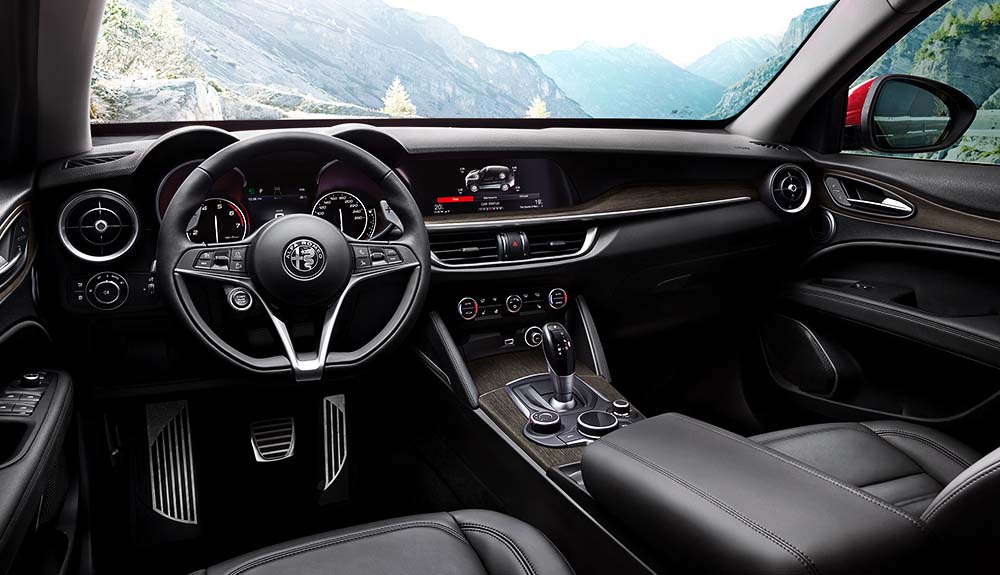 The Stelvio isn’t without its quirks, though. The infotainment system, controlled by a large knob on the centre stack, is a labyrinth of menus and sub-menus. Switching between radio and satellite was so cumbersome that we eventually gave up and resigned ourselves to the bluegrass presets on our tester car.

The vehicle also had a hyper-active forward-collision warning system, which seemed to be triggered by heavy snow. Finally, the push-button tailgate had a habit of stopping halfway down.

Only time will tell if those snafus are an anomaly or part of what critics might describe as Alfa being Alfa. But this is certain: the company made its reputation by building drivers’ cars, and the Stelvio is definitely one of those.

Find out why these four electric cars will be creating a buzz this year. And don’t forget to check out the top trends we spotted at the 2018 Canadian International AutoShow.