“I like representing my school and doing the best I can to make accidents go down,” says the Grade 6 student at Westminster Woods Public School in Guelph, Ont.

That dedication was the reason Suhaib, who turns 12 in July, was recently named the CAA School Safety Patroller of the Year. The award recognizes the student volunteer who has made an outstanding contribution to the nearly century-old school zone safety program.

In Ontario, up to 2 million students commute to school daily, whether by walking or biking or by car or bus. The CAA School Safety Patrol program is an added measure of safety in a busy school zone. 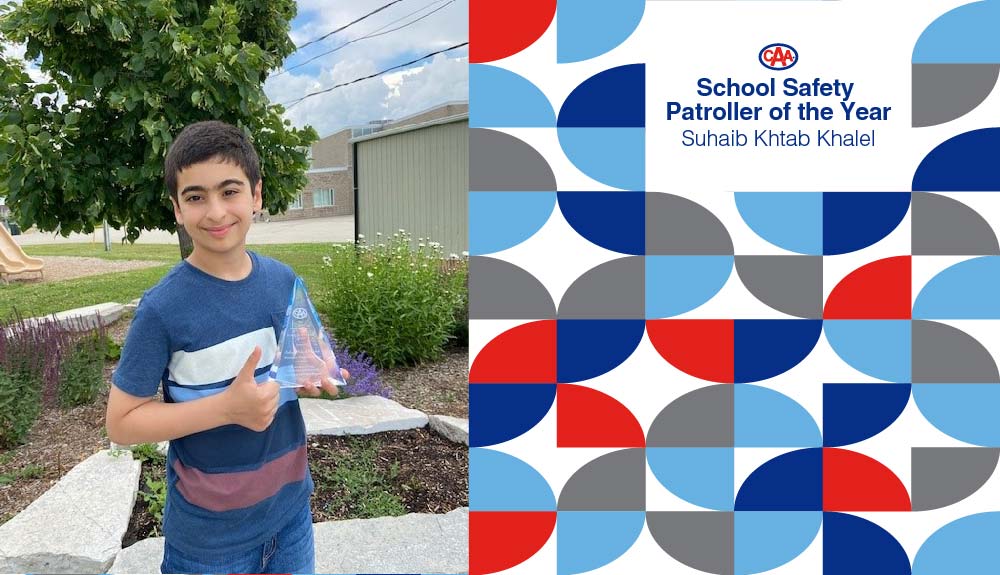 The CAA School Safety Patrol Program by the numbers

In a typical year, more than 20,000 students from 900 Ontario schools take part in the CAA School Safety Patrol. They help their peers get to and from school safely, whether by foot or by school bus.

Suhaib was stationed on the busy street in front of Westminster Woods where he helped classmates navigate traffic.

Luke Forcey, a Westminster Woods teacher who supervises the patrol program, says Suhaib would often arrive at his post early and stay late. He was vigilant while on duty, and after hours, he was eager to help fellow patrollers improve, providing tips and advice on how to monitor an intersection.

“He’s a funny, smart, kind individual who was always available to cover shifts when we needed it, which was exceptionally helpful this year given the circumstances,” Forcey says of the upheaval caused by Covid-19.

Suhaib, who wants to be an engineer, joined the patrol program in 2019 and will be returning next year as patrol captain, a position that will see him mentor other patrollers.

“What I love the most,” he says, “is helping people and making Guelph—and Canada—a safer place.”

Learn more about the CAA School Safety Patrol program and how to ensure safer school zones for everyone.